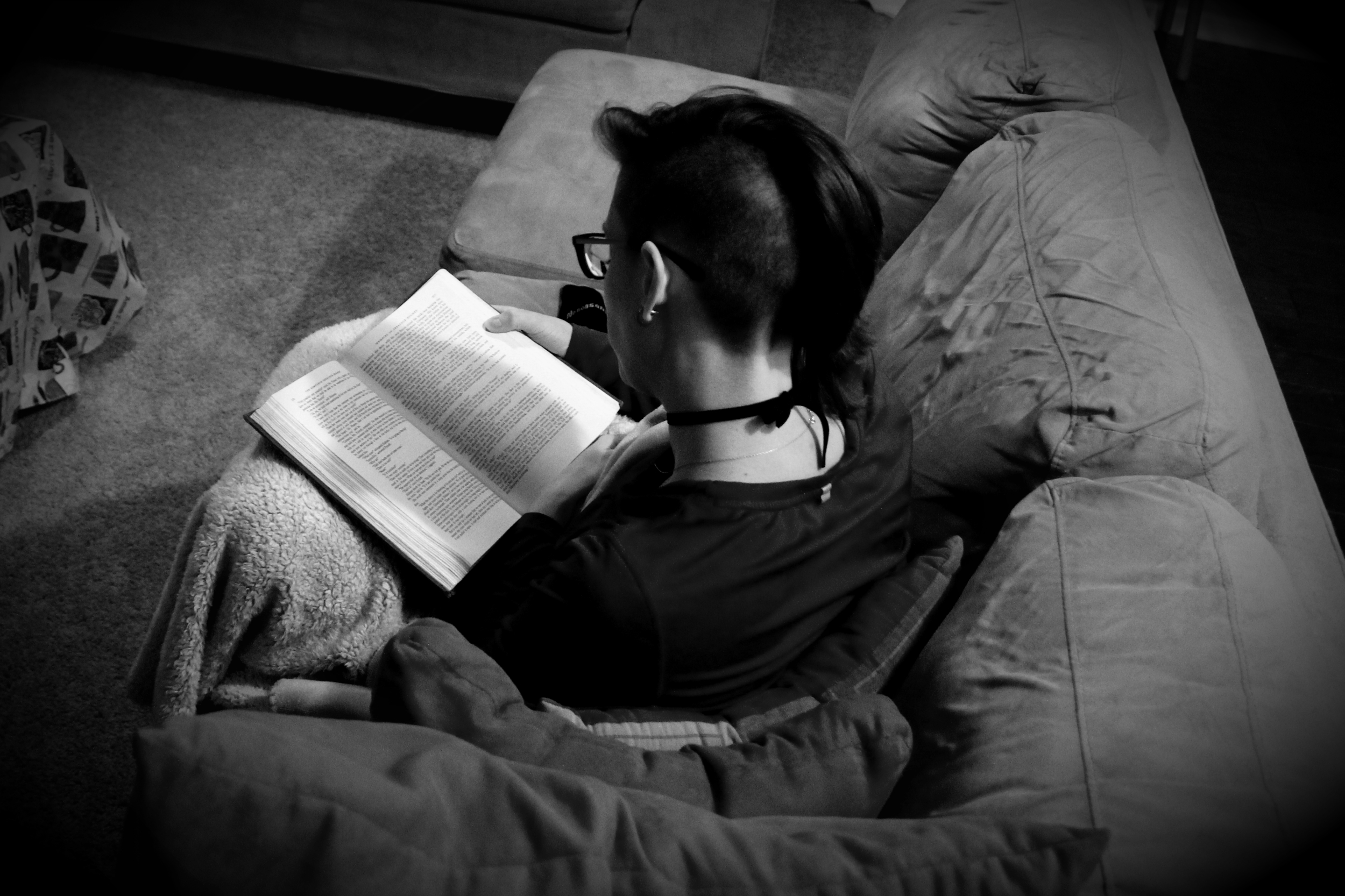 Shave it off and connect

Two nights ago, I bravely handed the trimmers to my partner and asked him to shave off almost half my hair. This wasn't as shocking if you consider we've been cutting my hair for at least a year now. Usually, it's mostly on me. I use a comb and trimmers to layer my hair back into a nice uneven pixie. And my partner trims up the neck

This time though, I wasn't sure I could give myself exactly what I wanted. Two months prior, I had pointed out a pretty pink headed girl on tv. She had part of her hair shaved and I thought it looked pretty bad ass. My partner gave his less than thrilled opinion, none the wiser I had been secretly pining for the style. But it was a small enough crush that the fire had been easily extinguished.

Till I saw it again, and again, and again. And gradually my desires turned into screenshots and pictures in text messages. Though he never directly said no, he would wrinkle his nose or run his fingers through the growing locks with preemptive dismay. Without his support, and my frugal nature, I was limited to trimming it as I had.

Back to the night of the shave, and I'm starting the process of trimming up the short side of my hair when my partner asked what I had wanted. In the best way I could imagine, I covered my hand over the already shorter side.

"Just shave it off?"

Several reviews of the pictures and one Youtube video later, we were ready to get started.

The feeling of a razor on my head is no stranger to me. Over a year into our relationship, I had gone from at least a foot of hair to a long bob. But even that was growing too much for my busy schedule. I missed the ease of a pixie, though not the price of its constant trimming.

For whatever reason, the thought of washing and drying my hair one more time finally broke the straw. And one Tuesday morning I walked downstairs and asked my partner to shave my head. We cleared a section of the living room, set up a chair, and got to work. Half an hour later I was free from my thick troublesome mess and feeling the pride and revival that only comes with shaving all your hair off.

My boss and class full of students were all surprised and supportive, giving the appropriate approvals everyone does to women when there's a hair change. They were surprised I had the balls to do it. But seemingly more surprised to hear I had a boyfriend. And then, even more, surprised that he had done it himself.

In 2015, I was still hearing "He let you do it?" Yes, my male partner had let me cut my hair. Yes. Because it's my hair. And a proper partner sticks by what makes you healthy and happy. Me trimming my hair not only kept the wads of hair off the shower wall but made me feel pretty damn cool. Their reaction shocked me and made me appreciate what type of relationship I really had.

Three years later, watching him shave my head (this time, even more dramatically, and into a style he wasn't totally sure about) I was reminded what type of relationship we really have. And one everyone should have. Find that person that's willing to shave half your head. Not because he thinks it looks good, but because he knows it'll make you happy.

Glancing back several hours ahead that day, one might have been shocked to hear I had such a touching moment, let alone believe we're married. Then agree why those moments are so needed. Moments where everything stops and you realize what you really have right in front of you.

We've come to realize we both have opinions of how things should be done and don't try and hide these opinions. Sometimes we can easily avoid these differences. Like a week before, when he told me how to properly dust and I told him how to vacuum, we ended up cleaning on completely separate floors of the house. Till "together" we got the whole house done. The other none the wiser how it actually got accomplished.

However, when you're stuck in the car together, there is no getting around it. I tried to buffer my nagging with a few "I love you"s because I knew I was saying something every other minute. From "get off your phone" to "you're speeding" when he was going 70 mph.

In his defense, the speed had just dropped.

Not surprisingly he pulled over so I could drive, knowing I hate driving, but I deserved it if I didn't think he could do a good job. This led to us parking blocks from our destination because I couldn't parallel park in the empty spot, conveniently located in front of our desired store. To which he countered by making me carry the bag of cat food back to the car. Or well, not offering to take it. Which I saw as the same thing.

Later on, we couldn't even agree on the proper path to the bank. After so many disagreements and petty remarks, I wasn't even sure if I wanted to ask him to trim up my neck. But it had to get done, so I sucked it up. Leading us to an hour of nervous then excited laughs and cheers, and away from any memory of our sour spats.